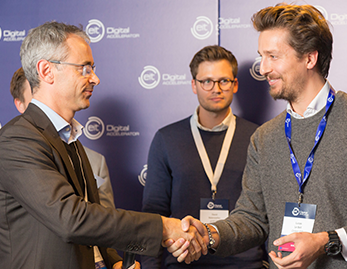 Press Release: CerbAir awarded at EIT Digital Challenge for being one of the “scaleups” who will change Europe.

On November 7th, Lucas Le Bell, co-founder and CEO of CerbAir, received from Thomas Herlin the valuable prize of EIT Digital, an EU funded European innovation network More than 279 scaleups were competing for the most prestigious competition of the European deep tech. Since 2014, the EIT Digital has distinguished the expertise of European companies from start-up to scaleup. It focuses on encouraging companies that will have an impact on the future of Europe.

At the end of a competition gathering candidates from 33 different countries, CerbAir won the first prize in the “Digital Cities” category. An award also accompanied by a grant and a support in development.

“This is not your usual competition where just the winners count,” states Chahab Nastar, Chief Innovation Officer at EIT Digital. “The 25 finalists have been carefully selected; they are all winners in the sense that they all have evidence of growth potential. The juries saw tremendous qualities in the 10 companies that came on top. We now welcome them into the EIT Digital Accelerator and will give them dedicated pan European support for customer acquisition and fundraising. We want them to become large dominant companies in their respective markets” he adds.

“I am deeply proud for CerbAir and our team,” says Lucas Le Bell co-founder. “This award also recognize the support of our investors such as MBDA (European missile represented by Denis Gardin), Jean-Michel Aulas through his family office and Technofounders, the French studio startup who helped launch CerbAir,” he recalls.

“We founded CerbAir in 2015 but the production of our radiofrequency (RF) anti-drone solutions was only initiated in 2017. In two years, what a long way!” recalls Lucas Le Bell, graduated from Management School of Lyon. “The prize awarded by the EIT Digital will allow us to access new markets european wide. Our solutions are already implemented with the army and the police operational teams. The support of EIT Digital will allow us to strengthen our position in the institutional and civil sectors,” he comments.

CerbAir is the French leader in CUAS (anti-drone) detection and neutralization solutions. CerbAir’s DroneWatch is a combination of scalable, drone detection hardware and of software powered by proprietary algorithms which allow security administrators to detect, characterize and neutralize rogue drones and locate their pilots from the moment the drone remote control is switched on. CerbAir’s technology has assured airspace security and assisted in rogue pilot apprehension at a number of high-profile events including major music festivals in Europe and North America, and over critical infrastructure such as airports, administrative structures and correctional facilities in countries around the globe. CerbAir has earned the trust of major corporate and institutional players like various Ministries of Defense and Ministries of Interior and recently collaborated with the elite French police unit RAID during the 2019 D-Day Commemorations held in Normandy, France. To learn more about CerbAir, visit our homepage: www.cerbair.com

A love and hate relationship between the USA and China.

DJI is the world’s largest manufacturer of civilian drones and its products can be found in a wide variety of recreational and commercial settings. Given the ubiquity of DJI drones, their ease of use and affordability, many governments and police entities around the world now employ them in their day-to-day operations.

In October 2017, following a series of drone-related incidents, the Chinese drone giant released a drone detection and tracking system called Aeroscope designed to allow security administrators to spot errant or hostile DJI UAS in their airspace. Aeroscope has been adopted at a few major airports and is seen by some as an answer to a growing drone threat to air traffic. But, Aeroscope comes with some serious issues of its own.

Tensions have been rising between the United States and DJI’s home country of China and US officials have become increasingly fearful of Chinese-made devices potentially spying on American communications and critical infrastructure and transferring information back to China.

In May 2019, President Trump signed an executive order allowing the US government to ban the importation or use at sensitive sites of flagged Chinese tech, declaring a “national emergency” over alleged attempts to exploit vulnerabilities in American IT and communication systems for spying purposes. Huawei’s 5G project has already been targeted for suppression by the US government and various US allies dropped the technology under American pressure. Could DJI and its products, including Aeroscope, be next?

The future looks ominous. Although the executive order singled no specific country or company out for punishment, it was widely interpreted as a swipe at China. Furthermore, the Cybersecurity and Infrastructure Security Agency of the US Department of Homeland Security issued an alert on May 2019 that Chinese-made drones may pose a “potential risk to an organization’s information.” The alert continued,

“The United States government has strong concerns about any technology product that takes American data into the territory of an authoritarian state that permits its intelligence services to have unfettered access to that data or otherwise abuses that access…Those concerns apply with equal force to certain Chinese-made (unmanned aircraft systems)-connected devices capable of collecting and transferring potentially revealing data about their operations and the individuals and entities operating them, as China imposes unusually stringent obligations on its citizens to support national intelligence activities.”

Once again, no particular company was singled-out, but given that DJI drones account for around 80% of the US and Canada civilian drone market and that it maintains its headquarters and servers in Shenzhen, China,  DJI is the most likely target. DJI has vigorously denied any involvement in espionage and taken steps to relocate some of its operations to North America, but among US officials a heavy cloud of suspicion hangs over the company.

If the Department of Homeland Security or President Trump decides to crack down on DJI technology, use of Aeroscope, particularly at sensitive sites in American territory such as airports, seaports or military infrastructure may become impossible. And the threat isn’t limited only to the United States. As illustrated by the case of Huawei, the American government has been known to put heavy pressure on its allies to divest themselves of technology it considers dangerous, meaning security administrators in Europe, the Americas, and Australia may be forced to throw out Aeroscope and other DJI products if they want to continue doing business with the US.

Although the threat of an American crackdown should weigh heavily on the mind of anyone thinking of integrating Aeroscope into their airspace security set up, Aeroscope presents a couple of other serious limitations that merit consideration.

CerbAir is proud to be the French leader in counter-drone solutions with proprietary technology developed in-house, within the European Union. That means there are no potential backdoors or diplomatic snags that could put your sensitive airspace, or your investment at risk.

DJI drones account for about 80% of the civilian drones on the market today and its Aeroscope system is capable of picking up the vast majority of them. But what about the other 20%? In the case of a dedicated criminal or terrorist group, the solution is as simple as purchasing a non-DJI drone (of which there are dozens of models and companies to choose from) to slip through a security system and reach their target. Some adversaries, like the Syrian rebels who attacked a Russian airbase in early 2018, even build their own drones from scratch – making impossible for Aeroscope to catch.

At CerbAir, our drone detection solution detects the overwhelming majority of civilian drones on the market today (DJI and non-DJI alike), and our direction-finding feature allows a security administrator to locate the rogue drone pilot on top of his UAV. Police or security personnel can be immediately directed to the area and apprehend the offending pilot, eliminating the drone threat at its root and reducing the chances of repeated incidents. Gatwick’s nearly 3-day closure cost the airport authority and airlines nearly £17 million in lost revenue. Imagine the savings if the drone operator could have been taken out within the very first hour of the incident.

Is it worth the risk?

DJI and Aeroscope are household names and many people are attracted to the simplicity of adopting an Aeroscope anti-drone solution without really doing much research on the pros and cons. But, buyer beware. While Aeroscope is a fine product, the risks of a US crackdown on DJI and the limitations and vulnerabilities built into Aeroscope’s fabric might make it more trouble than you’ve bargained for.

When looking for an anti-drone solution, ease of installation and use, as well as cost should all figure into your calculations. But a few other key features to consider include a CUAS solution that is:

CerbAir is a European leader in CUAS (anti-drone) detection and neutralization solutions. CerbAir’s DroneWatch is a combination of scalable, drone detection with our Hydra radio frequency sensor and our software powered by proprietary algorithms. Our anti-drone solutions allow security administrators to detect, characterize and neutralize* hostile drones and locate their pilots from the moment the drone remote control is switched on.

*The purchase or usage of jamming technologies only applies to public order, national defense or national security needs, or public law enforcement in accordance with local regulations.

Japan’s government moved to enact new legislation to restrict the operation of civilian drones over Japanese Self Defense and US military sites as well as over venues for the upcoming 2020 Tokyo Olympics and 2019 Rugby World Cup. Further restrictions reinforce ban the use of drones over or near airports.

According to the Japan Times, an English-language newspaper based in Tokyo, only drones providing coverage for and controlled by authorized media outlets will be allowed to operate over sports events. The Japanese government amended the existing law due to fears of terrorism, citing examples of drone attacks carried out in Venezuela, Syria, Yemen and most recently in Saudi Arabia.

This is not the first time that Japan has tightened its civil aviation laws in response to fears over drone-based attacks.

Japan first amended its Aviation Act and passed a new law in response to an incident in 2015. Yasuo Yamamoto, a 40-year-old environmental activist who was deeply opposed to the use of nuclear energy in Japan, flew a drone loaded with a small amount of radioactive sand over the Prime Minister’s office. The device landed on the roof and was not spotted by an employee until two weeks later, prompting the evacuation of the building.

Since then Japanese authorities have recorded a spike in illegal drone activity – often linked back to foreign tourists who are unaware of the rules.

Following the Yamamoto incident, Japan passed an amendment prohibiting drones, among other places in:

Night time and beyond line of sight flights were also banned.

Tokyo has recently been rattled by a rash of drone sightings in restricted areas including two drone intrusions over the Imperial Palace, residence of the Emperor of Japan, and another sighting over the famous Shibuya street crossing.

Would you like to learn more about drone regulations in other parts of the world? Our white paper, A Survey of Drone Regulations Around the Globe is just what you’re looking for. Download your free copy today.

We use cookies to ensure that we give you the best experience on our website. If you continue to use this site we will assume that you are happy with it.OkNo